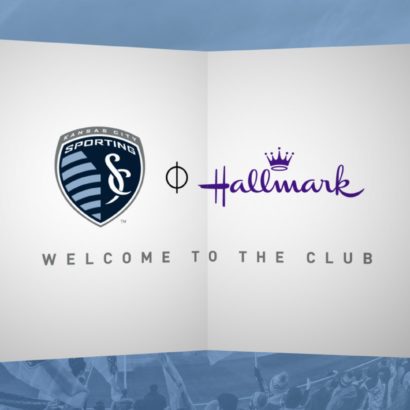 Kansas City, Mo. (Feb. 26, 2019) – Sporting Kansas City and Hallmark announced a creative new partnership on Tuesday designed to align the brands around opportunities to put more care into the world by reaching fans, players and families across the soccer community.

“Both Hallmark and Sporting Kansas City are perfectly positioned to reach the Kansas City and greater Midwest community with messages of kindness and caring,” said Lindsey Roy, chief marketing officer – Hallmark Greetings. “Cards are a tangible example of how easy it is to brighten someone’s day or even their world. Our hope with this partnership is to reach as many people as possible through the unique intersections where greeting cards can positively impact the soccer community to inject some positivity into the world.”

“On behalf of Sporting Kansas City, we are thrilled to formally partner with Hallmark,” said Justin Compton, Sporting KC’s Vice President of Corporate Partnerships. “Sporting Kansas City hopes to provide a positive outlet to Hallmark’s vision and continue to explore new ways to reach fans of both brands within the local community and beyond.”

The industry leaders will team up on a wide variety of initiatives over the course of the two-year partnership, including support of The Victory Project to help children battling cancer and Sporting Salutes to honor the service and sacrifice of military members and their families, as well as collaboration on social media campaigns and special events where greeting cards can bring more care through the soccer community.

Founded in 1910 and headquartered in Kansas City since its inception, Hallmark was ranked on Forbes’ list of America’s most reputable brands in 2018 and was also named Greeting Card Brand of the Year for the eighth year in a row.

Sporting Kansas City has reached the MLS Cup Playoffs for eight straight seasons, most recently securing a first-place finish in the Western Conference in 2018. Following a 3-0 victory over Deportivo Toluca FC on Thursday in the Concacaf Champions League, the club’s MLS home opener is set for March 10 at Children’s Mercy Park.

Sporting Kansas City is owned by Sporting Club, an entity founded by a group of local business and community leaders comprised of the Patterson Family, Cliff Illig, Pat Curran, Greg Maday and Robb Heineman. Sporting KC prides itself on a commitment and vision to provide high-performance experiences. Sporting Club purchased the team from the Hunt Sports Group in 2006, and under its direction has opened Swope Soccer Village, Children’s Mercy Park, Wyandotte Sporting Fields and Pinnacle while investing in the Sporting KC Academy and Swope Park Rangers for developing local youth into homegrown talent. A charter member of Major League Soccer, Sporting KC are two-time MLS Cup champions (2000, 2013) and four-time winners of the Lamar Hunt U.S. Open Cup (2004, 2012, 2015, 2017).