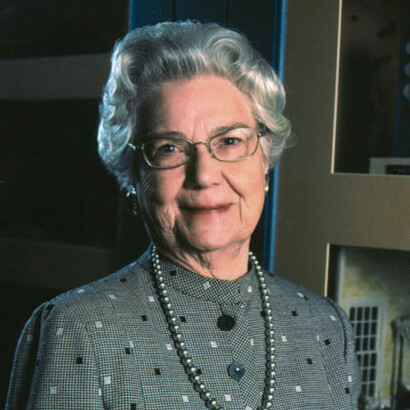 As one of three children of Hallmark founder J.C. Hall and his wife, Elizabeth, Barbara spent many childhood evenings at home helping her father review card designs. Her love of art and the people who create art stemmed from that early training and was the foundation for a lifetime supporting arts education and sharing her passion for art with the public.

“My grandfather recognized that from an early age, my Aunt Barbara had a natural talent for knowing which designs would strike an emotional chord with consumers, and which represented quality and excellence,” recalled Donald J. Hall, Jr., Hallmark’s executive chairman of the board. “She had such a finely tuned sense of the consumer, combined with a sharp eye for quality. Being able to tap into such a resource for so many years was a wonderful asset for Hallmark. She reminded us to always ask ourselves the question: ‘Will the audience find it meaningful?’ Her influence was felt in many positive ways.”

Her involvement at Hallmark spanned more than 50 years as a member of the company’s product review committee and later as part of a group charged with making acquisitions for Hallmark’s renowned art collection.

“In her quiet way, my sister Barbara was generous, thoughtful, constructive and an example for all of us.” said her brother, Don Hall. “She did so much for so many without any desire for recognition. She leaves a legacy for artists who will benefit from her support and a world class institution that reflects her collecting passion. And, she leaves family and friends who will miss her kindness.”

Barbara also was a nationally recognized collector of miniatures, and in 1982 partnered with toy collector Mary Harris Francis to open their collections to the public. The National Museum of Toys and Miniatures (formerly Toy and Miniature Museum of Kansas City) on the campus of the University of Missouri-Kansas City greets thousands of visitors each year and has been described as one of the finest museums of its kind in the world.

Barbara’s interest in the small and precise extended to nature as well. She grew Bonsai trees and was a founding member of the Bonsai Society of Greater Kansas City and served as a board member of the National Bonsai Foundation. More recently she helped lead efforts to construct a research facility at The Land Institute in Salina, Kansas.

She was a longtime trustee of the Kansas City Art Institute, first elected to the board in 1967 and serving on several of the college’s committees. In 1997 KCAI awarded her an honorary Doctor of Fine Arts degree to recognize her nearly 40 years of service. She recently provided the lead gift for a dormitory which bears her name.

More information about Barbara’s life is available on a tribute website created in her loving memory.