Longtime President of the Hall Family Foundation Announces Retirement in 2020 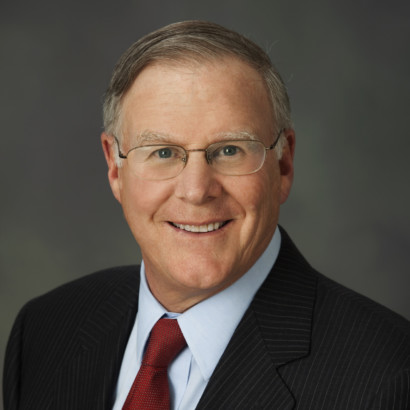 KANSAS CITY, Mo. (November 25, 2019) – Bill Hall, longtime President of the Hall Family Foundation and Assistant to the Chairman of Hallmark Cards, has announced his desire to retire during 2020.  The Foundation board will undertake a search process for his successor beginning early next year.

Bill Hall has served as president of the Foundation for 37 years and is a 51-year Hallmark employee.  He has worked closely with Don Hall, the Hall family and the board of the Foundation on numerous projects that impact Kansas City.

“As president of the Hall Family Foundation, Bill has done an extraordinary job of bringing to life the vision of my mother and father, Hallmark’s founder J.C. Hall,” said Don Hall. “Bill will leave a significant mark on the Kansas City community through his leadership and, more notably through his dedicated service to our city and its people.”

“I’m proud to have represented the philanthropic legacy of Joyce and Elizabeth Hall and to have had the pleasure to work with Don Hall,” said Bill Hall.  I want to thank Don, the Hall family, the board of the Foundation, and my associates for giving me this opportunity.  I also want to thank the Foundation’s community partners for all they do to make Kansas City a better place for all of us.  I have been fortunate to work with so many outstanding community people who are committed to Kansas City.”

“For more than 30 years, Bill Hall has been the most important influence on my work in the Kansas City philanthropic community. He is my mentor, my role model and a trusted advisor,” said Debbie Sosland-Edelman, Executive Director of the Sosland Foundation and former board chair of the Children’s Mercy Board. “He has earned this distinction because of his deep knowledge of the Kansas City community, his insight and his very big heart.”

Under Bill Hall’s leadership, the Hall Family Foundation was instrumental in expanding benefits to Greater Kansas City through support of numerous projects – large and small – in the arts, education, neighborhood development, health and social services.

THE ARTS:  The Foundation took a leadership role in the Donald J. Hall Sculpture Park both in its planning and acquiring sculptures.  The Andy Goldsworthy sculpture, Walking Wall, is the most recent acquisition.  The Foundation also provided funding and financing for construction of the Bloch Building, and enclosing of Rozzelle Court at the Museum.  Support for the world-renowned Nelson-Atkins Museum of Art photography department enabled special exhibits and significant acquisitions.  The Foundation also led efforts to renovate Kansas City’s Music Hall and The Spencer Theatre at University of Missouri-Kansas City, and supported numerous other performing art venues and organizations.

EDUCATION:  With longstanding interest in education, Bill Hall and the Foundation emphasized improving K-12 education and promoting quality and access to pre-K education.  In partnership with the Ewing Marion Kauffman Foundation and the Walton Family Foundation, work continues to improve educational outcomes in both charter and traditional public schools in the Kansas City, Missouri School District.  Grants from the Foundation launched the new Health Education Building and Hemenway Research Building at the University of Kansas Medical Center.  The Foundation provided key backing for KU’s National Cancer Institute designation.

“The evolution and transformation of KU Cancer Center would not have been possible without Bill Hall’s steadfast support to the vision,” said Roy A. Jensen, M.D., director, The University of Kansas Cancer Center. “With Bill’s leadership and dedication, he has been one of the foundations of our success and will continue to be a source of inspiration for our efforts going forward. He has been a tremendous force for good in Kansas City and a guy you always wanted on your team.”

The Foundation supported establishing the Oxbridge Program at William Jewell College and recently participated in the construction of a new dormitory at the Kansas City Art Institute.  The Hall Center for the Humanities on the University of Kansas Lawrence campus advances humanities research, teaching and outreach throughout the region.

NEIGHBORHOOD DEVELOPMENT:  Before Kansas City’s urban revival, the Foundation supported the revitalization of downtown’s Quality Hill neighborhood and helped lead the effort to resurrect Union Station.  This spring a new children’s area, supported by the Foundation, will open in the Station.  In addition, the Foundation has a long history of supporting urban neighborhoods on both sides of the State Line.

HEALTH:  In addition to the University of Kansas Medical Center, many health organizations have benefitted from Foundation support.  Children’s Mercy Hospital has been a special interest of the Foundation and has received support for the construction of clinics and hospital facilities, the recruitment of physicians, and most recently the construction of the new Children’s Research Institute that will not only benefit children locally but around the world.

“Bill Hall and the Hall Family Foundation have supported Children’s Mercy for decades. Bill understood that an institution providing excellent clinical care needed to ramp up its commitment to pediatric research,” said Sosland-Edelman. “He also appreciated and encouraged the value of collaboration. The philanthropic collaboration with the Sunderland Foundation made possible the largest philanthropic gift to pediatric research ever.”

Truman Medical Center also benefitted from capital improvements to their cancer center and maternity area, along with area health clinics.

SOCIAL SERVICES:  Not as visible, but equally important, are the many social service agencies the Foundation supports.  That support is diverse, from homeless shelters to youth serving agencies and from violence prevention to food pantries.  Of particular note was the Foundation’s response to emergency assistance needs during the 2008 recession and the following years.  The Foundation is especially proud of the funds contributed to establish the Black and Hispanic Development Funds.

“Bill Hall has been a pillar of philanthropy in this community for a long time. He embodies The Hall Family’s commitment to make Kansas City a great place to raise a family,” said Ramon Murguia, chairman of the Hispanic Development Fund. “Bill made sure that philanthropy was accessible to all in this community and was a champion for racial equity before it became a tag line.”

Bill Hall has always led with a spirit of collaboration.  “We never accomplished anything significant by ourselves … it was always a partnership with other donors, elected officials, volunteers and not-for-profit leaders.  Recent efforts to end the Economic Border War reflect that cooperation,” said Bill Hall.

“It is the commitment to Joyce and Elizabeth Hall’s vision by Don Hall, the Hall family and our Board that has guided my work,” he added.

“Through Bill’s remarkable ability to collaborate with experts across a full continuum of not-for-profit organizations, his capacity to provide his excellent problem-solving skills to difficult issues and his willingness to roll up his sleeves to get things done, Bill has enriched our entire community for every Kansas Citian,” said Don Hall Jr.

Bill has served on numerous boards including chairing MRIGlobal, the Heart of America United Way, the Pembroke Hill School and the Greater Kansas City Sports Commission.  He was among those who led the effort to keep the Royals in Kansas City following Ewing Kauffman’s death and led the funding efforts for the College Basketball Experience.

For his work over many years, the Greater Kansas City Chamber of Commerce named him Kansas Citian of the Year in 2007.

Bill intends to remain involved with the Hall Family Foundation and Hall family members in an advisory role and will continue to be involved in community activities and looks forward to more time with his family.

About the Hall Family Foundation:

The Hall Family Foundation is a private philanthropic organization, based in Kansas City, Mo., dedicated to enhancing the quality of human life in the local community. The mission of the Hall Family Foundation stems from the original purposes of its founders: Joyce C. Hall; his wife, Elizabeth Ann Hall; and his brother, Rollie B. Hall. They intended that the Foundation should promote the health, welfare and happiness of school-age children, the advancement and diffusion of knowledge, activities for the improvement of public health, and the advancement of social welfare.

Programs that enrich the community, help people, and promote excellence are considered to be of prime importance. The Foundation views its primary function as that of a catalyst. It seems to be responsive to programs that are innovative, yet strive to create permanent solutions to community needs in the Greater Kansas City area.