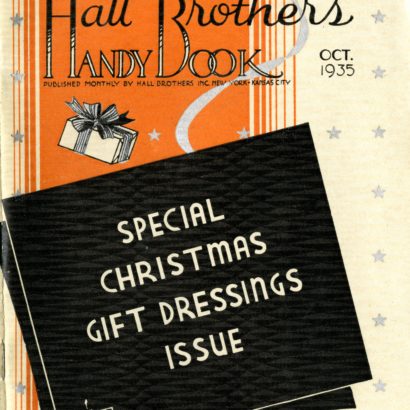 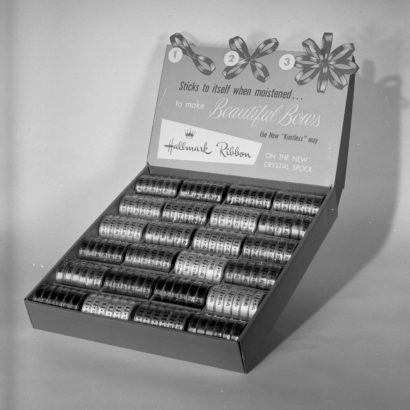 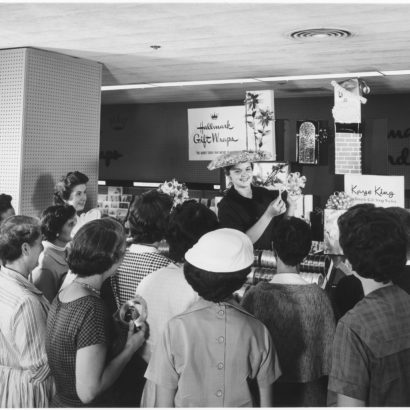 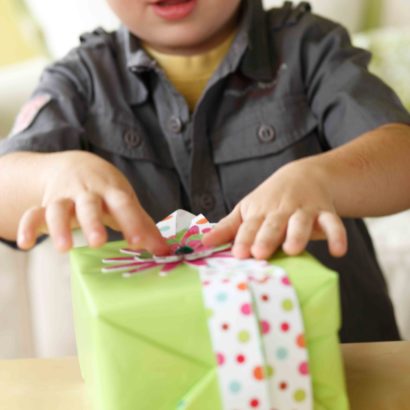 KANSAS CITY, Mo. (Nov. 6, 2017) — This holiday season, Hallmark is celebrating the 100th anniversary of gift wrap. The company is credited with founding the modern-day gift wrap industry in Kansas City during the Christmas season in 1917.

“Gift wrap, or gift dressing as it was called, in the early 20th century was very simple,” said Samantha Bradbeer, historian, Hallmark Cards, Inc. “People often used brown packaging paper or newspaper to wrap their gifts. Retailers, like Hallmark, sold green, red or white tissue paper, and if there were designs, they were typical holiday icons such as holly or wreaths.”

At Christmastime 1917, Hallmark sold out of the traditional tissue paper at its Halls store in the heart of Kansas City, Mo. Rollie B. Hall, founder J.C. Hall’s older brother, searched the company’s manufacturing plant and found recently imported French envelope liners that were brightly colored and highly stylized. The company sold the liners as gift wrap for 10 cents a piece and quickly sold out. The following year, Halls stocked up heavily and sold out once again.

“The brothers knew they had a hit on their hands, so they began designing and manufacturing their own gift wrap shortly thereafter,” said Bradbeer. “Gift wrap is the first product Hallmark made that was a departure from greeting cards.”

Over the years, Hallmark continued to innovate new products to help people wrap their gifts. In the 1930s, Hallmark tested Hall Sheen ribbon, a ribbon that stuck to itself and gift wrap when moistened, making it easier than ever to add a ribbon to a gift. The company later marketed the product in the 1950s. Hallmark introduced ribbon reels in the 50s, bright yarn ties, pom-pom bows, and super-wide ribbon in the 60s, and in 1987, gift bags made their first appearance on store shelves. Curl cascade ribbons, ribbons that are curled and gathered together, were invented in 1994. Hallmark began including sound and fiber-optic light technology in bags and gift card boxes in the mid-to-late 2000s.

The newest innovation from Hallmark was introduced just this year – the card pocket. This sleeve lines the inside of most gift bags and provides a space to place the greeting card so it no longer falls to the bottom of a gift bag or gets lost in the tissue paper.

“It’s exciting to look at our history and see popular trends in gift wrap over the last 100 years,” said Mary Emanuel, creative director of gift wrap, Hallmark Cards, Inc. “Gift wrap is very much a fashion-based category. People want the gift to be a reflection of their personal style or the recipient’s style. Our colors and patterns are rooted in trends. For example, we saw a lot of bright non-traditional holiday colors in the 60s and 70s.”

In addition to product innovation, Hallmark also changed the way gift wrap was marketed to retailers and customers. In the 1930s-1940s, Hallmark began advertising gift wrap on Tony Wons’ radio program, Tony’s Scrapbook and in Hallmark’s Handy Book for retailers. Between 1956-1969, Hallmark began actively promoting gift wrap by hosting workshops across the country. A gift stylist affectionately known as Kaye King, represented by several different women, would tour the nation giving demonstrations in stores, on television and to women’s groups and conventions. An estimated 200,000 viewers saw King perform her “pretty miracles” with paper and ribbon in The Art of Gift Wrapping, a 23-minute film in 1958 and Your Flair for Gift Wrapping, a 15-minute film in 1968. The Art of Gift Wrapping manuals were also available at retail locations that carried Hallmark products.

“Hallmark is committed to helping people emotionally connect with one another,” said Emanuel. “Our cards and gifts help people build stronger relationships with the people they love. It’s incredibly special to know that our gift wrap has been a part of so many meaningful moments over the last 100 years.”

To commemorate this anniversary, Hallmark artists drew inspiration from four original gift wrap prints from nearly 100 years ago, reimagined them, and created four new wrapping paper designs that are sold together this holiday in a special edition four-pack. Shoppers can find this four-pack along with all Hallmark gift wrap at Hallmark Gold Crown Stores, Hallmark.com, and thousands of other retailers across the U.S.