In grade school Eric won a “Slinky” and tickets to the “Ice Capades” drawing pictures for contests on a local morning cartoon TV show.

This love of drawing and Slinky’s led Eric to the Kansas City Art Institute and to a BFA in illustration.

Immediately after graduation Eric found his home as an Illustrator and Writer in the funnier division of Hallmark, “Shoebox Greetings,” where thousands of cards and over twenty-five years later he is still excited to come into work. “I’ve spent more than half of my life dreaming up and making the kind of cards I’d want to send to my family and friends… It’s a pretty good gig.”

As well as designing and writing cards for the “Shoebox” and “fresh ink” card lines, Eric has also had the opportunity to create cards for many Hallmark clients, including Life Is Good, Disney, Warner Bros., DC Comics and yes, even “Duck Dynasty.”

Eric was a part of Hallmark’s, “Writers and Artists on Tour” and Eric even mumbled his way through a nationally televised commercial shown many times over the years during Hallmark’s Hall of Fame.

In 2010, Hallmark’s 100th year, Eric received the Barbara Marshall Award. For six months, he traveled across the country photographing people in moments of everyday life. These images, 100 in all, were accompanied by small true stories. Eric’s favorite story from this time was the one where he learned he was to become a father. “I owe my entire new life, (my wife, my boy and even my dog) to that lovely woman, Barbara Marshall.” 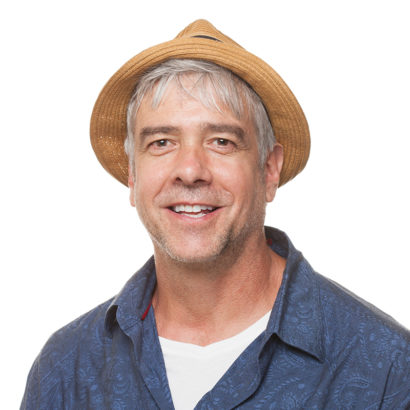